Agroforestry simply means farming with trees. In the tropics, all farming should have some trees in it – to protect plants and soil from heavy rains and to give shade from the sun. Trees also perform many, many other beneficial functions.

In permaculture we use lots of different sorts of agroforestry systems. Here is an introduction to 2 of them: Alley cropping and Food Forests.

The video starts with an example of current conventional monoculture that most people practice – the land is cleared and burned, then plowed, and a single crop sown (in this case yam).

Alley Cropping is a good place to start. Farmers can easily plant lines of trees in their fields, leaving alleys in between where they can still grow all of their usual annual crops such as yam, cassava, pineapple, cereals and beans. You can even design the system so that you can get into the alleys with a machine or an animal and cart or plow (not that we would advise plowing – it is usually only necessary to break up hard, compacted ground, but if the ground is protected from heavy rain by tree canopy and mulch, it stays soft and is easy to plant so you don’t need to plow).

Good trees to use are fast-growing nitrogen fixing species like Moringa, Sessbania, Leucaena or Gliricidia  that will give filtered shade (but not too much) and fertilise the soil for the crops grown in the alleys. These trees can be pruned, or pollarded, when the rainy season comes to keep them just above head height and the leaves can be used as a fertilising mulch on the alley crops. 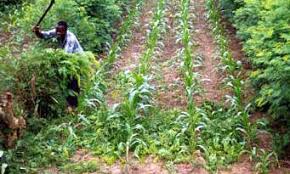 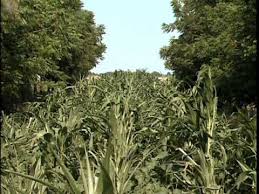 Even better, we can grow a mixture of trees, including fruit trees and even some timber species as well. we need to be careful to chose trees whose root growth pattern does not interfere too much  with the crops in the alleys – a good strategy is to use deeper rooted trees and shallow rooted annual crops in the alleys. That way there is no competition and the trees bring up nutrients from the subsoil that they return to the topsoil and which the alley crops benefit from. Alley cropping can also help prevent soil erosion on sloping farmland, if the tree lines are planted as belts along the contours. 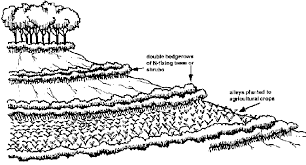 It is also good to grow a mixture of crops in the alleys. as well as cassava and cereals, climbing plants such as beans, yams, black pepper and even pumpkins and squash will love climbing up the trees, and the alleys ensure enough light gets in from either side to give good yields. You won’t need to cut any more sticks in the bush for your yams – if you need any extra, you can just cut them from the fast growing trees! And you can also get a lot of small firewood for cooking. 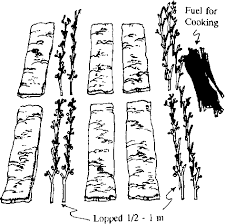 This mixture of plants really helps to control pests too – there is a lot of habitat for birds and pest predators, and a real confusing mixture of plants, so pest populations are naturally controlled. and as well as all this, you get a nice cool and shady place to work. No more sweating under the hot sun in an open field!

Food forests are the next step on. They are similar to alley cropping, but even denser and more complicated, with more layers that closely resembles the structure of a natural forest.  But all the plants are food, building materials, medicine or other useful material.

There is a dominance of perennial plants and some trees are grown on to full size to make an over-canopy with other trees making under-story layers. When the system is mature there may be less light getting down to the floor than in an alley cropping system,  Annual crops can still be grown well on the ground level in these systems, but some may grow a little slower or yield a little less because of the lower light levels – however this is more than compensated for by all of the other things being produced on the same land: there is a lot more growing and using all that vertical space! You can also keep clearings inside a food forest, or alleys, that let in a little more light so as to boost the annual crops. It is easy to manage it both ways: the only work is to prune and mulch.

In Europe a lot of the nutrients in a healthy growing system are found in the soil – sometimes up to as much as 80% – and the rest is held in the living and decaying plant biomass. In the tropics, it is the other way around – sometimes as much as 80% of the nutrients in the system are held in the plant biomass and up to as little as 20% is held in the soil. Tropical soils are fragile and easily become eroded and lose their nutrients, particularly when the plant cover is removed.

When Europeans colonized tropical countries, they brought their style of agriculture with them – but it does not work well in the tropics. By clearing away the forests and planting monocultures, fragile tropical soils have quickly been exhausted. They don’t need chemical fertilisers to make them productive again: they need the right kind of growing system.

Because dead plant materials break down so fast, it is important to always have other plants there ready to take up the nutrients released and turn it back into living biomass, as well as the nitrogen fixing plants and trees to take in nitrogen from the air to keep the system fertile. Without this, nutrients are quickly eroded from the system – washed away in the rain or given off to the air as gases. This is why tropical soils can appear to be low fertility, because when we burn or clear the plant cover, the biomass degrades fast and the nutrients are lost – up to 80% of them!

As well as all of this, underneath a more densely growing plant system is a healthier and more complex root and fungal system in the soil. Because the soil is not continually dug and plowed, a much richer, complex and multi-layered living system develops, which boosts fertility and plant resilience. Recent research proves that beneficial fungi makes partnerships between the tree roots and helps to connect up the whole growing system underground.

Fungi trades nutrients with plants in return for sugars that the plants make from photosynthesis. Some fungi can even convert inorganic phosphorous and potassium in rocks and subsoil into organic forms that the plants can use, and fungi can also suck in water over long distances to help the trees survive drought. Effectively, beneficial symbiotic fungi extends the plant’s root systems and increases its ability to uptake nutrients, creating a healthier and more resilient system. Some kinds of symbiotic fungi even boost plant’s immune systems, making them resistant to harmful fungi. Spraying fungicide onto your crops also kills all the beneficial fungi, so in the long term you make crops weaker by doing this. The best way to control harmful fungus is to have a more diverse system with more plants and root types, more perennial plants and less disturbed and eroded soil: then plants will have healthier immune systems and there will be beneficial fungi present.